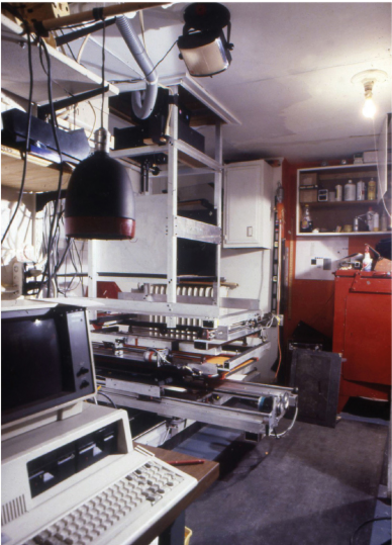 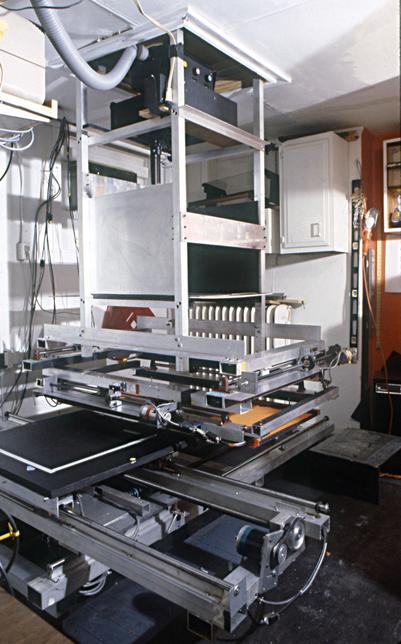 THE GENESIS OF THE CYBERGRAM™  CONCEPT

In 1980-81 a series of experiments with the Staromat photo-lettering enlarger began with multiple exposures and movements of its print stage onto photo enlarger paper. Unidirectional East West movements were made with the calibrated stage of the Staromat and eventually some rough manual North South movements we combined. Continuous tone negatives of the female nude were employed.

The design of the device took over a year in planning as well as delving into the unfamiliar area of stepping motors, controllers, interrupters, linear shafts and bearings, timing belts, pulleys and eventually computers. Much advice was given by filmmaker Wayne Boyer and engineer Jim Logan, both of whom included among their skills the building of animation stands. Jim Logan contributed to the program which evolved over a six year span.

Because of budget and facilities, aluminum extrusions were employed and bolts were used as fasteners. After 11 years and thousands of prints, the structure has remained remarkably stable. The most recurrent problems in the total mechanism were those pertaining to the electrical connectors and connections, burned out resistors and rectifiers.

The fabrication, assembly and erection of the structure was done by me using a table saw and drill press with little reference to the drawings. The structure took less than 2 weeks to build and erect in-place. The upper structure was solidly hung from the ceiling joists. The minimal machining required for the lead screws and motor pillow blocks were gratis from friends.

The 1983-84 cost of the project was approximately eight to ten thousand dollars.

The device was originally conceived to include projection of continuous tone negatives. Currently the lamphouse is employed with a lens simply as a collimated light source. Greater tonal modulation could be achieved with a positional negative carrier with projecting to the easel stage with various shaped masks intervening at the platen stage. The negative carrier was to be actuated by stepping motors on an XY motion-controlled negative stage. The making of color prints was one of the early priorities, along with autofocusing, but I now favor working exclusively in continuous tone black and white.

There is no end to technical innovation and garnishment, but at this stage

I would seek greater emphasis on the content of the many areas explored.